Develop a concept and building blocks for extending the life cycle of once launched satellites, by performing in-orbit maintenance.

Servicing a satellite containing an automatic or remote-controlled robot arm can grasp and the target satellite designed components repaired or replaced.

The study is about the building blocks for such servicing missions and covers a wide range of aspects: economic feasibility, to make to the design of the auxiliary vehicle driven redesign the customer-satellite for remote maintenance possible from the earth to the maintenance to perform.

To replace a faulty component such as a battery or radia sender the maintenance satellite has spare parts and a robotic arm to carry out the work. The replacement of a representative part is tested with an industrial robot in the laboratory.

Heemskerk Innovative Technology guided the Dutch company Heeze Mechanics on behalf of Dutch Space in designing and building a new gripper. The gripper was tested successfully during a testing campaign that was conducted in the laboratory of the University of Leuven in 2008. 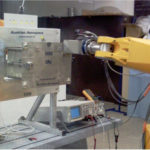 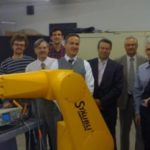 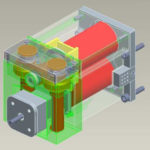